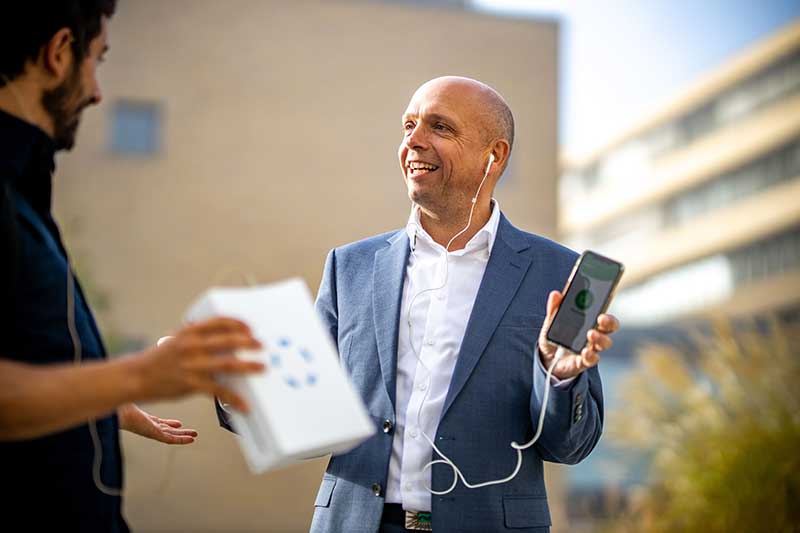 The first business idea was born. From then on, Berger created complete city tours that could be accessed on the Internet. Many cities took advantage of the offer; Potsdam, for example, was on board right from the start. The company offers everything from a single source: text, language and technical implementation. “The biggest challenge here is to combine artists and IT experts in one company. That requires a lot of expertise. Today, there is even a degree program for human-machine interaction,” says Ulrich Berger.

Business idea number two is the live guided tours with city viewers. This technology is also used by the Guiding Group on cruise ships. The group is active in this segment worldwide and has already won major shipping companies as customers. “We have opened the door and will continue to expand this field. Real-time transmission of voice is our unique selling point,” says CEO Dr. Johannes Matthias. Of course, the slump caused by the Corona crisis is noticeable. Nevertheless, Matthias still wants to equip ships now. He has developed a rental model in which payment for the system is linked to utilization. He expects the industry to recover in the second half of 2021, but Corona also creates opportunities for smart streaming technology, because tourists now prefer to use their own smartphones because there is no risk of infection.

Smartbox’s wi-fi reaches guests even on the High Seas, in the wilderness or in catacombs – and in high voice quality. What’s special about the startup is that it already has a lot of entrepreneurial know-how. “We have a good product for which we want to open up new markets,” says Ulrich Berger. He is the serial founder and CEO of several companies operating together on the tourism market under the label “Guiding-Goup” and the spiritus rectus of the Potsdam start-up. Smart Streaming has proven itself in tourism. But does it also work for other industries? CEO and co-founder Dr. Johannes Matthias is confident that there are markets for it. The first thing he wants to do is recruit trade fair and congress organizers as customers. To be more present in the new business fields, he has recommended to Ulrich Berger that he set up his own GmbH for smart streaming.

Ulrich Berger is Austrian and has been at Home in East Germany since the early 1990s. “I started my own business right after graduating from high school and founded five companies, all of them still in business,” he reports. His biggest task, however, was to be establishing the Guiding Group.

Dr. Johannes Matthias has been managing director of Smart Streaming Solutions Voicetra GmbH since its founding in 2019, but he has known the group of companies for quite some time. As a startup mentor, he supported numerous technology companies in the startup stages. This is also how he got to meet Ulrich Berger. Dr. Matthias was inspired by the group’s philosophy: “We are successful because we develop things with and for the customer, because we are a technological innovation leader, and because we cultivate a truly creative spirit within the company.” And that’s important to him, too. Johannes Matthias comes from a family of artists and philosophers in Leipzig; he learned the violin and piano, and was in the St. Thomas Boys Choir as a boy. Later, he studied business management in Leipzig, Boston and Harvard. For his own startup, Potsdam was the destination of choice: “It’s not just the support of the federal state of Brandenburg for startups and young companies that I feel is unique in Germany, but also the atmosphere, which offers time and space for innovation.”